Warning: count(): Parameter must be an array or an object that implements Countable in /homepages/44/d96953007/htdocs/vincent/wp-includes/post-template.php on line 284

For the second month in a row I found myself at the Illinois State Park Straved Rock to shoot a proposal. Luckily for me, this time I wasn’t the rouse in-front of the proposal. It was actually pretty easy this time around. Especially once the weather held out and the couple came away with some beautiful moments captured on camera.

Brett got in touch with me about doing the hidden photographer thing while he popped-the-question to Kelsey on one of the paths at Starved Rock. His plan was to find the right moment when nobody else was around on the path and get down on one knee. I just had to look as ordinary as possible so as not to create any suspicion. So I threw on some hiking boots, cargo pants and a backpack and made my way out to the path he planned on using.

I made sure to arrive nice and early and the place was already packed, as the fall colors were just starting to come out and I was worried that Brett was never going to find the right time to pop-the-question as the trails were almost as busy as the Chicago lake front path in the summer. A few text messages after they arrived I spotted the couple walking down some stairs towards me. Ironically I was giving some camera tips to some other fall color fans and I’m sure that helped me blend right in.

I kept watch out of the corner of my eye as the two walked past. It really is a wonderful part of my profession to be able to be in on the secret and know something like this is about to happen. After a brief walk up some stairs Brett slowed down and dropped to one knee at the end of a long straight-away. Prefect placement on his part as I was far enough back to not be noticed and yet still have a perfect view. It took Kelsey a few steps before she realized Brett had stopped, at which point her phone just dropped right out of her hand.

I think the images below will help fill in the rest of the story. Like “did she say yes?”

Also, I have to give a big thank you to the random family who helped make the photo shoot even better, by helping me make it rain leaves in front of the recently engaged for one of the portraits we took.

Hey, random family at Starved Rock, I don’t know who you were, but thank you for throwing some leaves in the air to really make this photo. 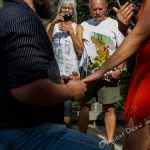 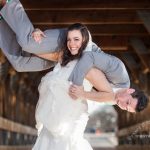